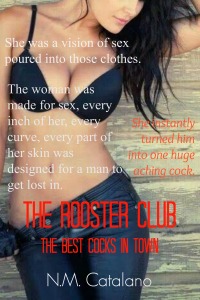 THE ROOSTER CLUB
The Best Cocks In Town
Coming soon…

“Come on, baby, let me take care of you. Your friends are going to be busy for a while,” Gail purred into Michael’s ear. …
Michael hesitated. Gail’s meaning, everything that was happening in this room, was clear. He saw what was going on all around him, how all the men were being seduced. Gail was offering him anything he wanted, he had no doubt. He wanted to leave, every instinct told him to get out. She reached down and drew a fingernail over the hard-on in his pants. Michael hissed with the force that pulled his balls so tight, and his dick so hard, as something clicked inside him, and took over. Blood seared through him, fueling his lust and blinding him, blotting out all coherent thought. The only thing he could hear was his dick screaming, ‘Feed me!’ He remembered the words Steve had said, ‘Don’t get caught doing anything stupid,’ the words echoing in his mind.
“Not here,” Michael murmured through his blinding lust.
“Ok, come with me,” Gail said, and she took Michael’s hand.
She led him through the door she and the girls had come from. It led to a stock-room piled high from floor to ceiling with boxes of files and old office equipment. Gail locked the door behind them after Michael stepped in.
She began to take her clothes off. The woman was made for sex, every inch of her, every curve, every part of her skin was designed for a man to get lost in. As the last piece of clothing hit the floor, she moved to Michael and got down on her knees.
“I have wanted to suck your cock from the minute I saw you,” she said huskily.